When it comes to cooking, simplicity seems to translate roughly to time is of the essence.  Each food magazine has its “meals in 30 minutes” section, and frankly, there are nights (specifically nights involving a glass of wine, the couch, and saved episodes of Downton Abbey) when egg on toast can be transcendent. One of the key aspects of my college education was developing an entire repertoire of meals that were quick, simple and cheap, from arugula tossed with balsamic and brown rice to peanut butter and fig jam Paninis.

Funnily enough, it was also in college that I discovered the joy of cooking. With my limited budget I quickly found it most rewarding to cook an elaborate meal for six, then guiltily store it in the back of the communal fridge (away from prying eyes and forks) to eat for six meals running. Friday nights I would arrive home from my eight-hour internship and one-hour Trader Joe’s expedition just in time to wish my housemates well on their way out for the night. For the next delicious hours I had the place entirely to myself, and it was then and there that I discovered the pleasures of the unhurried meal.

The things I made were simple—there were no emulsions, no expensive cuts of meat, no kitchen tools fancier than the celebrated Panini press. It was a college kitchen, after all, and in New York to boot: small, grimy, and cheaply installed. After unpacking my groceries I did a thorough clean of the counters and sink, dumping plates in the dishwasher and sweeping up the crumbs that kept the mice our loyal companions. I laid out all of my ingredients and happily set to work with my knife, chopping along to the tinny speakers of my laptop and trying not to splatter the screen with lemon juice.

Surrendering to the sheer time it took for beans to soften or meatballs to simmer became the most comforting experience of my week. Chopping carrots and turnips was methodical and reassuring; peeling butternut squash was a practice in patience. I developed an affectionate reliance on simple recipes with multiple stages, like a warm potatoes gribiche flecked with roasted broccoli and hardboiled egg, or a fragrant African curry with spices packaged for separate additions over the course of two hours.

This flatbread recipe (an instant favorite I’ve made three times this week) is wonderful in its simplicity, easy to prepare but perfect for leisurely cooking. I mix the dough at some point in the afternoon, then make the spread and topping after turning out the dough for a second rise and heating the oven. It’s an old saying, the one about the journey and the destination, but I somehow keep discovering it anew. 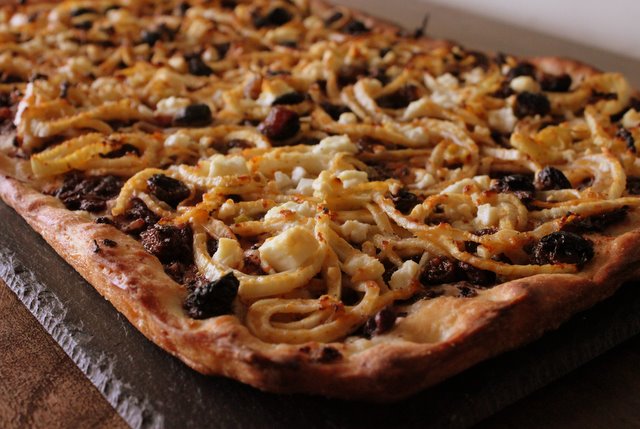 The dough for this recipe is adapted from Jim Lahey’s wonderful book My Bread, which has been out on the kitchen counter from the day I got it. I love the aroma of fennel and the salty-sweet combination of olives, feta, and golden raisins, but this dough is a true blank canvas–experiment away!

In a large bowl, combine dry ingredients and then mix in water with your hands to form a moist dough (add a bit more water or flour if dough is too dry or sticky). Cover and let sit at room temp for 2 hours (longer is alright too).

For the second rise, loosely shape dough into a ball (it will have increased in size) and set on a well-floured plate. Cover with a damp towel and let sit at least half an hour.

To make the olive spread, add the first three ingredients to a blender with 1/3 cup of the sultanas and pulse until roughly blended. Set aside. Slice the fennel into thin slivers and toss with red pepper flakes, lemon juice, half the parmesan, the other 1/3 cup sultanas and a glug of olive oil.

Preheat the oven to 500 degrees. Spread out the dough on a well-oiled cookie sheet by stretching it first the full length of the pan and then the width, gently nudging it outwards until the whole sheet is covered. Cover the dough evenly with the olive spread, then arrange the sliced fennel mixture on top. Sprinkle with the crumbled feta and other half parmesan and drizzle with honey, then bake at 500 degrees until crust is crispy and toppings are browned, about 15-20 minutes.

the best pizza ever

It was 8pm on Thursday night, and Ross and I were hunched over the granite countertop in the classroom kitchen, surrounded by dough and toppings. “You’ve got to make love to it,” he said with husky reverence, rolling the dough so that it stretched into a thin layer that we lifted onto a metal sheet pan. Having been cooking for close to 12 hours I felt qualified to get intimate with a pizza—after our morning meeting Ross, Phillip and I had headed straight to the kitchen to marinade chicken, boil potatoes, and process three batches of dough in the KitchenAid. It was a cooking marathon comparable to Christmas, and for an equally worthy occasion—Zach’s 21st birthday party. 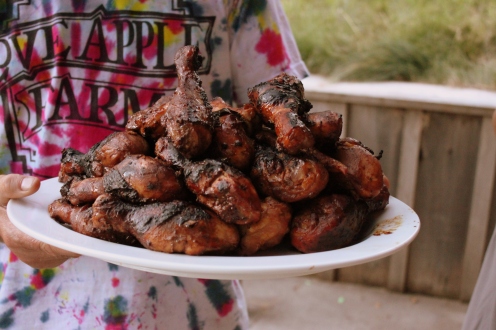 I’d never really had success with pizza. When the urge for a homemade pie struck I usually resorted to Trader Joe’s prepackaged dough, but unfortunately that route generally results in a lumpy crust and a soft, undercooked center. When we decided to do pizza for Zach’s party—Love Apple has a beautiful pizza oven in the center of their outdoor patio—I was tempted to go for premade dough again, but Costco had none to offer. So I put on a confident face for Cynthia and Zach, assured people I’d made pizza on several occasions, and grabbed my laptop to google “pizza dough.”

Fortunately the first thing that came up was a recipe from Heidi Swanson, creator of one of my favorite food blogs, 101 Cookbooks. I made the dough at 8am Thursday morning with fingers crossed, but I knew it had a lot to live up to—Ross’ toppings included his famous caramelized onions and mushrooms, and Phillip’s barbequed chicken and ribs are pretty incredible. Then there was the bounty from the garden to contend with—carrots that became shaved carrot salad with thyme, chard that paired with quinoa, apricots, and pine nuts, and eight kinds of greens that filled three salad bowls. To top it off we even made potato salad with blue cheese and egg salad with eggs from the chickens. (If you can imagine the fridge at this point you’ll understand why the Christmas comparison begged to be made). 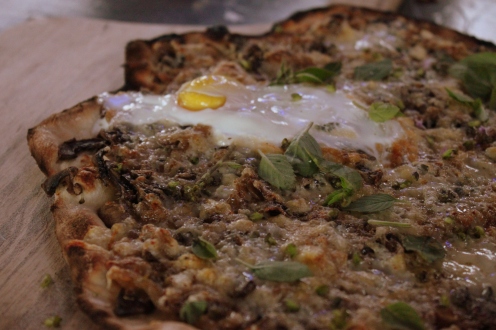 By 8pm the pizza oven—fired up at noon—was finally ready, and Ross and I carried out a pizza topped with caramelized onions, mushrooms, and gorgonzola. I’d selected a small egg from the flat in the kitchen, and right before sliding our creation into the oven Ross cracked it gently over the top. After three minutes in the oven and a few of Ross’ skillful maneuvers with the pizza peel, our pizza emerged—looking like real pizza. It was perfect.  I don’t think I’ve ever been so giddily proud of something I’ve helped to make, but mostly it was just a wonderful moment—the pizza, the food, the people, my first month on the farm. Six pizzas later I still felt just as good.

I followed the recipe from 101 Cookbooks as closely as I could, with the main exception being that I made the dough early in the morning instead of the night before.

In a large saucepan, melt a knob of butter and add the sliced onions. Caramelize over medium heat, stirring so the onions don’t stick and watching for them to turn a shade of dark golden brown. Saute the mushrooms separately, then mix in with the onions and set aside in a bowl. On a well-floured surface, roll your dough gently with a small rolling pin until it reaches about 12 inches in diameter. Transfer to a floured pan, or a pizza stone (or flipped-over cast iron pan) if you make your pizza at the highest temperature setting in a traditional oven. Smooth a scoop of the caramelized onions and mushrooms on the dough, then crumble gorgonzola on top. Right before cooking your pizza crack a small egg over the center, then slide into the oven and watch carefully for doneness (the crust should brown and crisp, the cheese should bubble, and the center should not be soft). Remove from the oven and sprinkle with salt and torn pieces of fresh basil.